Winter Sports 2020 Season Up In The Air 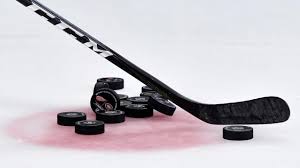 Covid-19 has taken so much from us already what next? For numerous high school athletes it’s going to be this upcoming winter season. Although it is very sad for the seniors this year, the choice the state made will keep everyone safe. The sports that are affected this winter season are of the following: hockey, indoor track, basketball, wrestling, and swimming. All of these sports have senior participants, whether they are captains or just trying to finish their high school career season for the last time. There has been talk about cancellations or postponations for the upcoming season. All we can do is hope for the best, especially for our seniors!
Over the past couple of weeks, we’ve reached out to numerous winter sport athletes in our school to tell us what they had to say about their season potentially being cancelled. From the hockey team, we’ve had a few players fill us in on what they have to say. “I’m devastated that after all these years I’ve been playing hockey and going to school and I can’t even play my senior year in front of the loudest student section. It’s upsetting that we have to miss our whole season due to a virus that isn’t as deadly to us young teens.” said Mathew Brunelle(senior). “Honestly I thought we had the team to do it this year. It’s tough to see your last season turnout like this.” said Cam Pete(senior). “Pretty mad we can’t go after a championship this year and I’m even more sad for my boys who won’t get their last chance.” said Aidan Sullivan(junior).
We received other quotes from our saddened athletes, who would be participating in other sports programs this upcoming season. For girls basketball, Kate Walas (senior) said, “I hope we get to play this season. I’ve been playing basketball since I was 3 and I really hope I get a senior night because it is something I’ve been looking forward to for the past 3 years.” Taylor Borowski (senior) “Thinking about how our last season might get cancelled upsets me. Playing Basketball is my favorite thing to do and I’ve been so excited about having a senior night and playing my last games with my teammates since freshman year.” Kyle Johnson, a senior on the boys basketball team stated, “ In hope of my last season coming up, I hope Covid allows me and the rest of the seniors to have our last final ride with the boys that we deserve; I know all of us would love nothing more to have one last season together.” Senior Austin Robinette has stated a really good point on what he believes the fate of this season holds “I feel like this season’s fate will come down to are they going to let us play real basketball or not. I don’t understand what modifications you can make to make it harder to spread COVID without running the integrity of the game. They should make it optional. If you want to take the risk play. If you don’t want to you don’t have to. That way we can protect high risk individuals but some of us can live a little. For indoor track Lily Matias a senior spoke out to us stating “ track was one of my favorite sports and now it’s canceled.” Sabrina Cruz also a senior on the track team stated “ Im sad its canceled because our track team brought everyone together and the team is do friendly and its upsetting now we won’t have that out senior year. We could not get a hold of speakers from boys indoor track, wrestling, or swimming at this moment but their responses would definitely relate to the ones we have received. Our hearts and wishes go out to the seniors this year and the rest of the athletes.