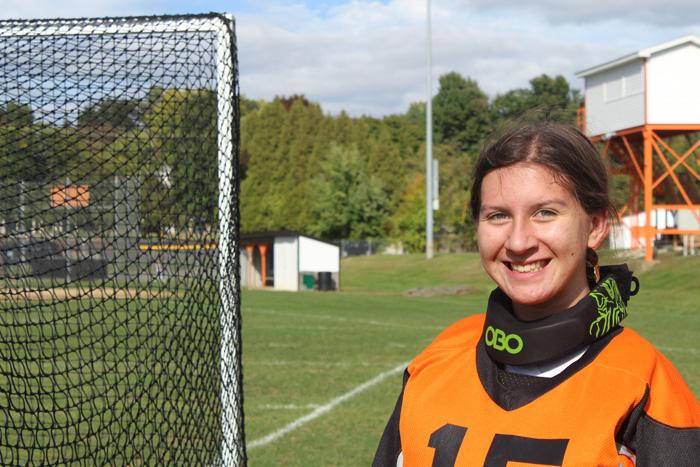 Number 15, Brittany Cote, started off her sophomore season strong with getting 73 varsity saves this year. Add that to the amount of saves she got her freshman year, and you would get a total of over 100 saves. Getting 100 saves is one of the many accomplishments that field hockey players have encountered at South Hadley High School. Her goal for the rest of her high school career is to reach 200 or more saves.
Brittany would not have been here today without her “amazing coaches Coach Cole and Coach Haber who have trained me and worked me so hard to get to the place I am today”, said Brittany when asked who helped make her the goalie and person she is today. Her teammates are like a second family to her and without their help and devotion to the team, she would not have reached her first goal.
At her last game, when she realized she had saved over 100 goals, she felt excited and better than she ever had before. Before every game, she is nervous and gets butterflies but she knows that she can rely on her defensive players to back her up when needed. Brittany has been playing field hockey ever since 5th grade and started in goalie in the middle of that same season. Just like today, she got nervous right before the game started because people were charging down the field. Brittany said, “It was intense being shot at with a small ball that surprisingly weighed so much”.
There are other girls who have accomplished many things as goalie at South Hadley High School. Brittany looks up to Lizzy Menard and Sam Brault because they inspire her to do better and to go farther than their achievements: at least 300 saves.