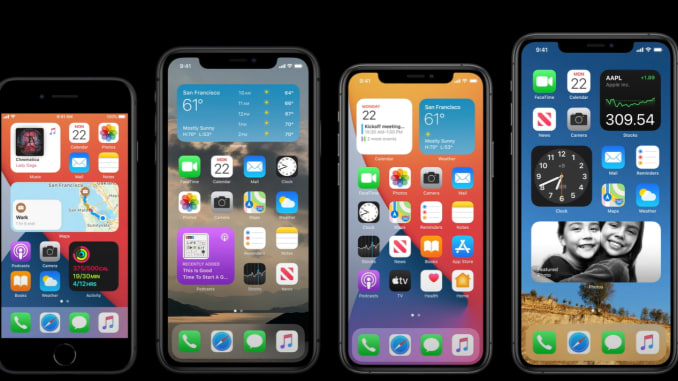 every iPhone user will now have a unique home screen that match their personalities.

Apple released a new update with crazy new features to iphone users and the world is flipping out! The update came out on September 16th, 2020. The update, ios 14,  includes custom designs on your home screen called widgets, new facetime features, a translate app, and more.

Each home screen can now look organized and different from each other. “iOS is very helpful because I can customize my home screen in any way that I want,” said sophomore Nathan Sarrazin. The day the new update came out, everyone made a “trend” on TikTok where they show off their new home screen. Some people organize by color and have a page for each color. Others use the shortcut app to have apps and widgets the same theme.

There are new apps like widget smith, photo widget, and color widget to make your widgets the color, design and you can even add photos of your choice. The shortcuts app lets you name and put a new picture on an app. For example, you can put a picture of you and a friend on your instagram app and rename it “insta”.

A couple new facetime/call features came out as well. When you go into another app while on facetime, the other person can still see your face. When someone calls you while on Netflix, snapchat, youtube, Tik Tok or whatever social media, the call won’t take up the whole screen it just shows you the number/ contact at the top of the screen. “It’s definitely better than the whole screen being taken up,” said sophomore Paige Robitaille.

Another fun feature is from Netflix. While watching Netflix, you can answer a text or check other social media while still having your show/ movie play in the corner of the screen.