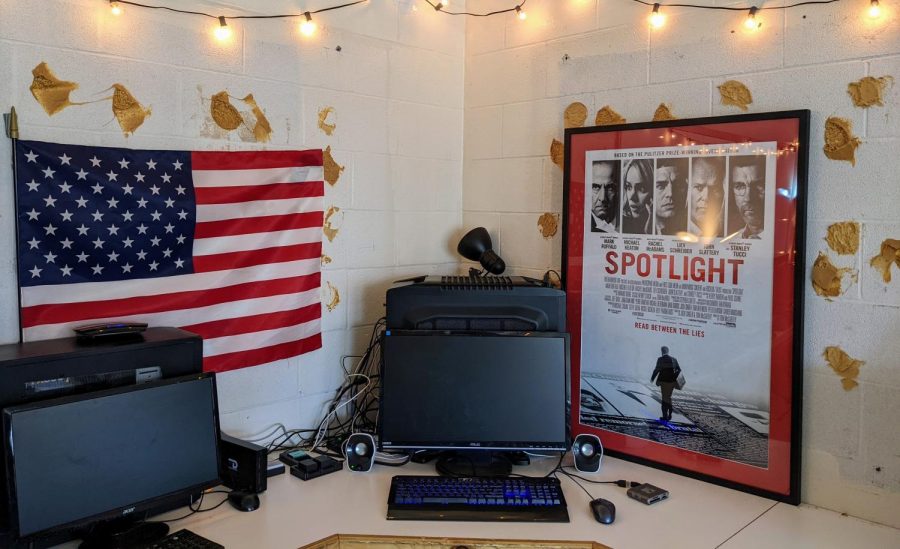 Brown wall splotches of glue in Room 512 where bulletin boards were located before the mold outbreak.

In the last week of August 2021, South Hadley High School was slated to open after a challenging Covid-19 school year. The weather that summer had been rainy and humid. Plans to open on time soon changed due to a pervasive mold outbreak at the high school, which eventually required high school students to begin the year remotely. The mold was first reported to Principal Elizabeth Wood around midday on Aug. 30, with growth on the walls of Room 514. By that evening it had spread outside of Room 514 and around the 500 hallway. Other teachers also reported growth in the 600 hallway, detailing mold on their chairs, desks, boards, posters, and bags. There is agreement that the summer’s humid weather and the swampy area near the high school played a part in the mold developing and spreading.

By the next day, teachers were told not to return and the public was notified that the high school was battling an issue with a mold-like substance. Teachers were allowed to request special items to start the year, or to bring other things home. Although by that point, the mold had taken victim to some items. Foreign Language Department Chair Paula Lonergan said she asked for some items and was denied because they were moldy or potential moldy.

Because the high school was not safe to occupy, the plan was to start school remotely on Sept. 2, allowing teachers a day to prepare remote lessons. However, the district was later told by the Massachusetts Department of Elementary and Secondary Education (DESE) that it would not count “mold” as an excuse for remote learning at that time. Without a practical or affordable second option, the high school’s students and staff were unable to begin the school year.

After two weeks of delay, the district got word that DESE had approved 7 days of remote learning that would start on Sept. 16.

On Sept. 28, the high school became the last school in the district to open its doors for the start of the year. Most were happy and shared a common joy of being back, but during the first week, the auditorium, music rooms, and weight room were still closed due to mold. All of the rooms reopened within the first two weeks, except for the weight room. There was some sadness from teachers; teachers reported that the mold took away many of their items, including gifts and letters from other staff members and students. The evidence of the mold-taking items includes the brown dried glue wall substance where bulletin boards were once and the emptiness of decoration in rooms. Additionally, dehumidifiers and mold filters were placed around the high school.

Despite school having started, the days missed to mold still needed to be made up, as Massachusetts high schools are expected to meet for 180 days, with 990 hours of education. According to Principal Wood and School Superintendent Jahmal Mosely, school leaders met with the teachers union and created the make-up day schedule with a few things in mind. First, they wanted to keep graduation the same day, as seniors are required to have 170 days of learning. Second, they wanted to also make sure there was some room for possible snow days. Together, they came up with a schedule consisting of one professional development day, four Saturdays, February break [minus weekends and President’s day], Good Friday, and one day at the end of the year.

There was, however, lots of debate regarding these days. Lonergan said teachers overwhelmingly voted against doing the make-up school on Saturdays.  This was echoed by other teachers, with staff saying while there was no good way to make up the days, Saturdays were the least attractive option.

Math teacher Maddison Casey said that Saturdays would work the best for her, but she said she also said no to Saturdays on the staff survey because when the survey came out, she had plans on some of the upcoming Saturdays. History teacher Leslie Goelz said she would have preferred any day but Saturday.

Teachers were not the only ones concerned about the prospect of  Saturday school. A petition was generated by community members saying they were unhappy with Saturday school, with more than 500 signatures.

Junior Kacie Levualult, the Class of 2023 secretary, said she was not happy about Saturday school but, if it was needed, was willing to do it. Senior class officers Jonas Clarke and Kaily Godek said they weren’t thrilled about Saturday school, and were looking forward to being done with the “troubles of high school.” Sophomore Victor Long had a different take, saying he was happy about how the district and DESE acted. He did not want Saturday school but said he would rather have had Saturdays over additional remote learning. Sophomore Jadyn Christie said she would rather have a remote start over Saturdays.

Freshman Alex Haesaert said he had not been to any of the make-up days, except for the Tuesday professional development one, adding he was unhappy with the makeup arrangement. Freshman Tristian Antunes said Saturday school should have not happened. Principal Wood and Superintendent Mosley both said the school would be flexible and willing to work with those who had previous obligations on the make-up days.

In terms of Saturday school, many teachers noticed a drop in student and staff attendance. Few tests or quizzes were given. Some teachers moved ahead with content, while others gave extra time or a fun activity. Anne Scully and Alexandra Mazzulli, the school’s adjustment counselors, said they would try to make every effort to be in school on those Saturdays to support the mental health of students and staff. Additionally, Principal Wood provided donuts from Big Y for students and staff who attended the Saturday sessions.

While it was originally thought that February break would be canceled and used for makeup days, feedback from students and teachers about the necessity of having a vacation prompted negotiations between the administration and teachers’ union, which resulted in an additional four Saturdays added to the calendar between January and March. These new make-up days were scheduled as half days, so teachers would have time for professional development.

Currently, the last day of school is slated for Wednesday, June 22. However, Principal Wood noted the district has asked the department of education for a waiver to excuse a snow day and a mold makeup day that were tacked onto the end of the calendar. If both days are approved, that would make the last day of school Friday, June 17.

As for measures being taken at the school to prevent mold from developing again, Superintendent Mosley and Principal Wood said they are trying to get air conditioners, a more robust air circulation system, higher-quality carpets in the library, better flooring, and a more effective drainage system in the courtyard. The drainage system is needed because the school experiences water runoff from the hills and excess moisture from the swamp. All of these capital improvements would require funding which would need to be approved by the town.