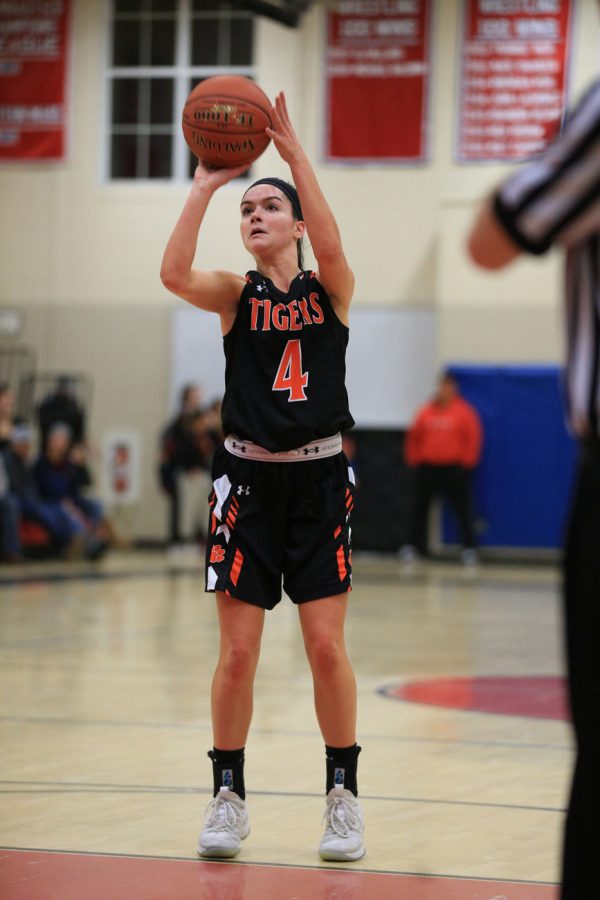 As Mia Kelly steps up to the line to shoot her first free throw, the audience holds its breath. Kelly lets the shot go and the ball bounces on the backboard once before falling through the net.

The clock stops at 2:17 until halftime. The gym at Hampshire Regional explodes with cheers, as Kelly becomes the fourth girl in South Hadley basketball history to score 1,000 points.

Kelly, a senior, has been playing basketball since kindergarten, and has been on high school varsity for all four years.

“The thought of 1,000 points has always been on the back of my mind, but I was never really sure whether it was going to happen or not.” Kelly said.

She didn’t know how close she was to the goal until her teammates on the court embraced her, and the student section from South Hadley burst into cheer and waved signs in support.

“I felt accomplished and relieved I got it out of the way, and I could just continue on with the game and the rest of my season,” Kelly said.

After Kelly scored the momentous 1,000 points, she hit two 3s to close out the first half of the game.

“We all know that she’s a great player and can score 20 points or grab 10 rebounds on any given night,” said assistant coach Jessica Nelson. “What makes me most proud to be one of her coaches, is how good of a person and teammate she has been these last four years.”

By the end of the game, Kelly had scored a career high 37 points, which helped clinch a 65-61 win against Hampshire.

“She is so good at all aspects of the game. She also has so much faith in everyone on our team.” said teammate Paige Marjanski.

As to making her 1,000 points at the Hampshire game, Kelly said, “I didn’t really feel pressure going into the game because I knew if I didn’t get it there, I would get it eventually. It was just a matter of time.”