Memory Traveling to the Alhambra

The sound of water burbling through a stone labyrinth of thousand-year-old acequias (irrigation ditches) fills your ears as you walk through the Moorish palace; the smell of roses and rosemary and lavender, among many other colorful flowers, wrinkles your sense of smell. The sun from the 90-degree heat stings your face and body as you walk around the dry ground, and your eyes squint whenever the wind kicks up dust. The rows of trees and towers surround you along with hundreds of visitors like me that were lucky enough to get tickets to visit this monumental palace. One can walk around to feel and see the great architecture, beautiful Islamic art which typically doesn’t include images of figures. This is the beautiful Alhambra of Granada, in Spain.

In August of 2019, in the pre- COVID-19 era when Americans were still allowed to travel, I visited the magisterial palace and fortress, the Alhambra, while vacationing with members of the Spanish side of my family. The Alhambra is one of Spain’s major tourist attractions and is well known throughout western Europe. Its popularity comes not just from the beautiful setting but mostly from the interesting history leading up to what it is now. In the late 9th century, the Alhambra was originally reconstructed as a small fort built on Roman remains by local Moors since the region was one of the most prosperous in Europe. It was then made mostly into what it looks like today in the 13th and 14th centuries when the Muslims ruled Spain and converted the building into a royal palace for the last Muslim dynasty (Nazari). At the end of the Reconquista in Spain in 1492 (when Christians took back all Muslim- ruled cities and towns), the Alhambra became the Royal Court for the Catholic King and Queen, Ferdinand and Isabella, at the time. So the Alhambra is a mix of Islamic art, architecture, and design with Christian/Renaissance influences and surrounded by magnificent gardens. 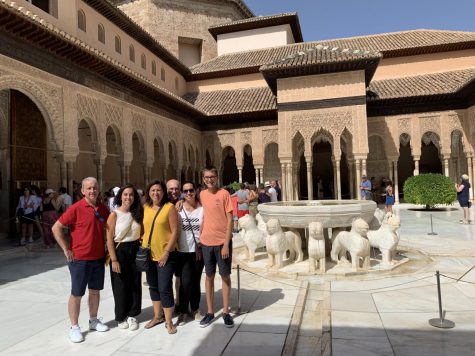 One of the most well-known and popular spots in the main palace is the Court of Lions. It is a spacious patio with marble lions in the middle and columns surrounding it. There are 12 lions in a circular arrangement around a fountain, with water spewing from their mouths. Another breathtaking part of the Alhambra is the Comares tower, the highest point of what remains of the Alhambra. It gives a spectacular view of the city of Granada and is an open area to walk around and take pictures (I do not recommend it for those afraid of heights). Do not forget to visit the restaurant inside the Palace, where you can have an authentic taste of Arabic-influenced Spanish food like Breua Nazari (Moorish-style pie) while enjoying the view of the Generalife (the summer palace) and its gardens. These are only a few examples of the many wonderful parts of the Alhambra, and it is recommended that you go yourself and get to see the rest. It is unique from others attractions one might visit as it is a Muslim palace in a European country, with a mix of the rich history of both cultures being physically shown. In the meantime, for me, with COVID-19 not allowing travel to these wonderful places, I will have to keep traveling with my memories.