Lonergan: The Art of Teaching Spanish 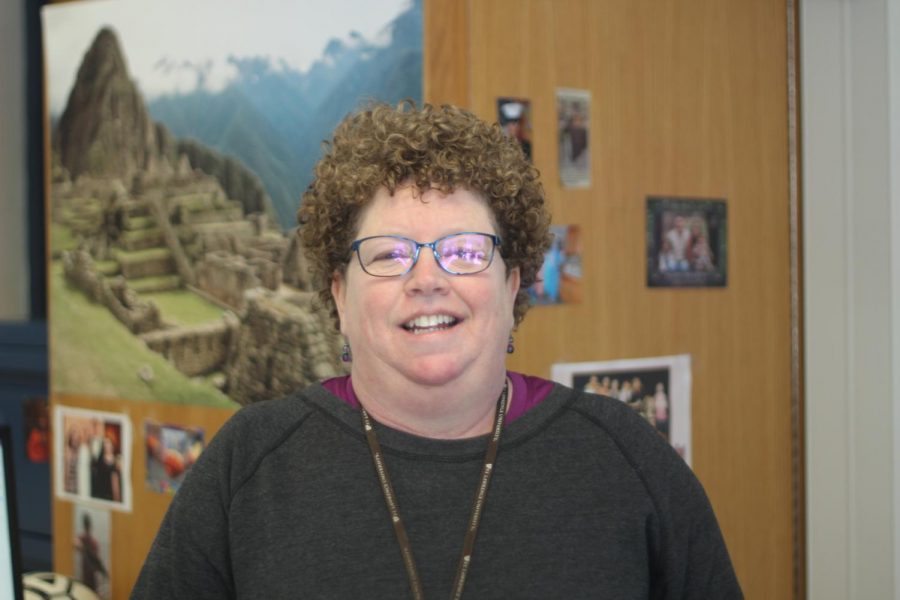 She sings, dances, and teaches with her own Latin flair. Her cheery demeanor is infectious, and even to non-Spanish student her passion for life is well-known. If you don’t know who this is by know, it is just an on the surface description of Paula Lonergan, a Spanish teacher and the head of the language department. While she is very open with her students, and you may be wondering what else there could possibly be to know about her, there is so much more to Paula Lonergan that we may not realize.

Lonergan was born in Waltham, Massachusetts, a small town near Boston. Lonergan says she had a great childhood, her earliest memory being as a toddler sleepwalking to her neighbors house in the middle of the night. She laughs as she remembers the shock that had shown on all of the adults’ faces when they had discovered her whereabouts. Her biggest inspiration as a child had been her Auntie Tie because she has faced so much adversity, her son and sister died in the same year, yet still keeps her bright and happy demeanor no matter what challenges she faces.

Lonergan went to Chelmsford High School (pronounced CHEMS-ferd, Lonergan notes it needs to be said with a bostonian accent). If you couldn’t guess, her favorite subject in school was Spanish, and she says the subject came naturally to her. However, you may have not guessed that she was greatly influenced by her sophomore year English teacher! Her teacher convinced her to become an AFS student, which allows students to study abroad; She spent her senior year of high school in Peru because of this program.

After high school, Lonergan went to Goucher College in Baltimore. She said she had an incredible experience in college, traveling abroad to Costa Rica and Ecuador as well as being a modern dancer through most of her twenties. She received an advanced degree in social work and education.

Phil Langevin, the Latin teacher at the high school, raves about his colleague. Langevin has know Lonergan for about 6 years. Lonergan was working as a paraprofessional at the time they met, and is now a teacher and head of department. The two now have classrooms directly next to each other and often talk about language; Lonergan even gives Langevin a Spanish lesson from time to time! The two often talk about music as well, sharing their different tastes and preferences; Langevin prefers classic rock while Lonergan loves Latin American music.

“A lot of people may not know this, but she has a great sense of music and rhythm,” Langevin says, “All three of her kids play music as well!”

Diana Bonneville, principal at South Hadley High School, hired Lonergan as a Spanish teacher a few years ago. Lonergan was brought to the high school to help a kid who spoke predominantly Spanish. Lonergan even started going to the middle school to teach Spanish part-time. When there was an opening at the high school, however, Lonergan jumped at the chance and Bonneville was happy to give her the job. A few years later, Lonergan was named head of the language department. “She’s a kid at heart. She doesn’t take herself too seriously and can really relate to the kids,” Bonneville said, “She is the backbone of the language department.”